The city of Kovai, better known as Coimbatore, is the state’s second-largest city – and a major manufacturing, healthcare, IT, education, commerce, industries, and textile hub.

When it comes to how Coimbatore’s name came about, there are numerous theories. According to one legend, ‘Coimbatore’ is derived from Kovanputhur (which literally means the ‘new town of Kovan’) after the chieftain Kovan/Koyan, which eventually evolved into Kōyambuttūr and was later anglicized as Coimbatore. A second theory states that Coimbatore’s origins lie with Koyamma, the goddess the chieftain Koyan worshiped. Eventually, Koyamma evolved into Koniamma and later into Kovaiamma, which is where the theory says that Coimbatore’s name comes from.

Coimbatore has a long, rich history of having been ruled by some of South India’s most powerful dynasties. Initially ruled by the Cheras, it became the important eastern entrance to the Palakkad Gap, which served as a trade route between the state and the West Coast. Later, the Vijayanagar Empire and the Madurai Nayakas took over. In the late 18th century, Coimbatore was annexed to the kingdom of Mysore and later to the Madras Presidency during the British rule. After the industry in Mumbai declined, Coimbatore’s textile industry flourished during the 1920s and 1930s. After independence, Coimbatore’s industry has grown rapidly. Today, Coimbatore is famously known as the ‘Textile City of India’ and the ‘Manchester of South India’ due to its reputed textile industry.  It is also one of the selected cities for the Honourable PM Narendra Modi’s Smart Cities Mission Programme and ranks 17th amongst the top global outsourcing cities in the world.

The best time to visit Coimbatore is in the winters between October and March when the temperatures are between 18 and 30 degrees Celsius.

Coimbatore airport lies 10km to the east of the city center.

Coimbatore Junction lies in the center of the city. 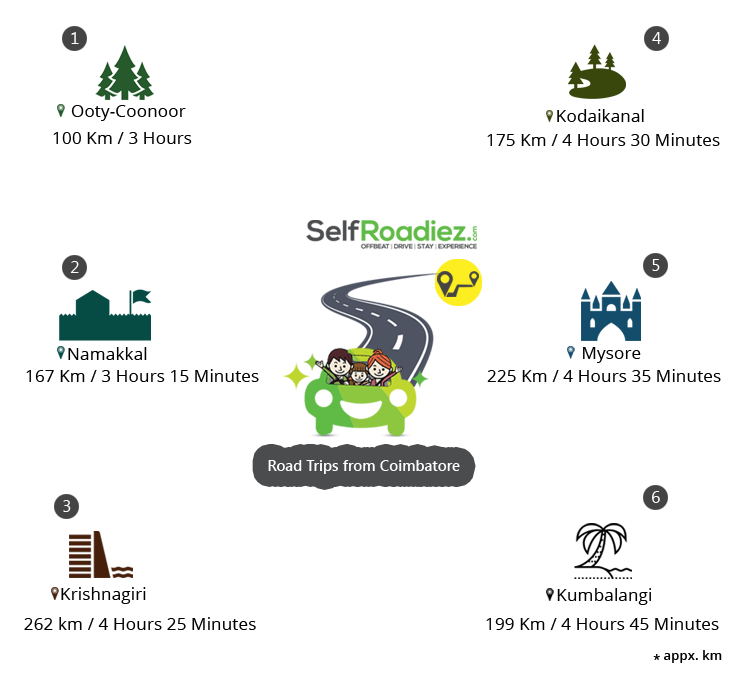 Deep in the heart of the Nilgiris lie two of South India’s most popular hill stations – Coonoor and Ooty (a.k.a. Udhagamandalam), where tall pine forests and tea plantations are a regular fixture. Travelers can visit exotic tea gardens in Coonoor and pick up various varieties of delicious tea and ride on the Nilgiri’s mountain railway. They can also visit the Botanical Gardens, Pykara Lake, Doddabetta peak and Silent Valley in Ooty, as well as indulge in adventurous mountain activities such as mountain biking, trekking, hiking, and angling.

The 7th century Namakkal, or Namagiri, derives its name from the historic single rock formation of Lord Anjaneya (Hanuman) n the town’s center, which is housed in the famous Anjaneya Temple. Namakkal has been ruled by almost all the powerful dynasties of the South and has many places for cultural and history buffs to enjoy. These include the Siddhar Caves, Rock Fort, the Lakshmi Narasimhaswamy temple, the Selur viewpoint, and the Botanical Gardens.

The town of Krishnagiri has an important place in Indian prehistoric history and has also been ruled by several powerful South Indian kingdoms. Places to see include the Krishnagiri Dam, the Sayed Basha Hills Fort of Tipu Sultan, the ancient temples of Krishnagiri as well as the 500-year-old Rama Temple. Travelers can also indulge in boating as well as visit the children’s park, and go trekking in the nearby hills.

The picturesque, premier hill station of Kodaikanal (‘Gift of the forest’ in Tamil) is surrounded by dense shola forests and is centered around the beautiful Kodaikanal lake, the banks of which bloom with magnolias, mahogany and myrtle trees, and rhododendron shrubs. Culture lovers will find Kodai observatory, Shembaganur museum and Christ the King and Lutheran churches intriguing. Nature-lovers can take a stroll up Coaker’s Walk, cruise on the Berijam and Kodai lakes, and visit the Bear Shola falls and Bryant’s Park. Adventure-seekers can explore the mysteries of the Guna Caves/Devil’s Kitchen.

Mysuru (anglicized as Mysore) is one of the most preferred and visited cultural destinations in South India, is home to royal palaces set amidst lush green gardens and also the former administrative seat of the Wadiyar Royal Family. Mysore Palace is its most popular attraction, where stunning architecture and heritage come together to create a mesmerizing cultural and historical confluence. Travelers to Mysore will enjoy visiting the sprawling lush green lawns of the Brindavan Gardens as well as the magnificent Chamundeswari temple at Chamundi Hills.

The island-village of Kumbalangi is essentially a fishing hamlet. However, it is also the first rural tourism village in the state and the first ecotourism village in the country as well. Travelers shouldn’t miss seeing the Chinese fishing nets dotting the coast, which is an interesting legacy of Kumbalangi. Travelers can watch the locals fish, observe fishermen indulge in clam processing and crab farming, and enjoy seeing the womenfolk of the village expertly weave golden fiber-coir and coconut leaves. One shouldn’t miss soaking in the sun by engaging in indigenous fishing or cruising the backwaters of country or rice boats.

Places to see in Coimbatore include the Marudamalai and Dhyanalinga temples, Arulmigu Patteshwarar Swamy temple, the Kovai Kutralam falls, the Gedee car museum, Monkey falls and the Velliangiri mountains.

Coimbatore is a major industrial city in Tamil Nadu and finding accommodation here would be no hassle. There are many star hotels here like Taj Vivanta, GRT etc. for those who love to travel first class all the way. For those who prefer their creature comforts at a budgeted rate can go in for three-star hotels that are available at nominal rates. That apart there are many budget hotels right in the middle of the city.

Don’t forget to taste Siruvani water, which is said to be one of the tastiest waters in the world, as well as the South Indian delicacies of Coimbatore.

Coimbatore is a tangy mixture of traditional and modern – travelers should enjoy the city for this beautiful blend that is excellent to experience.

Comfortcarz
December 13, 2017
With the stunning environment, rich culture, majestic temples, and ancient heritage language, Coimbatore will always be one of the enthralling destinations. So, keeping up the experience with passionate travel is vital. Keep up the good work.
Reply
Comfortcarz
December 13, 2017
Coimbatore stands for its ancient heritage, energetic climate, classic tourism views make us to feel at home. Undoubtedly, travelling around the alluring points of the city makes us delightful. Thank you for sharing. Nice post
Reply