Calicut, also known as Kozhikode, was once a trading town, seat of a formidable dynasty and a former Portuguese colony as well and also home to many premier educational institutions, most notably the Indian Institute of Management (IIM), the National Institute of Technology (NIT) and Calicut Medical College.

Locally known as Kozhikode lies on the Malabar Coast in Northern Kerala and has had many names – the Arabs called it Qāliqūṭ, the Tamilians called it Kallikkottai, the Kannada-speaking people called it Kallikote, the Chinese called it Kalifo and for the British, it was Calicut. Known as the ‘City of Spices’, Calicut was ruled by the Cheras between the 8th and 10th centuries AD, after which historic traveler Ibn Batuta visited the city and remarked about its greatness as a trading town. After that, Kozhikode was ruled by the great Hindu Eradi rulers Samoorthiris (a.k.a. Zamorin of Kozhikode) for almost six centuries between the 12th and 18th century AD. When Vasco da Gama visited India in 1498, he is said to have been received by the Zamorin himself. After Calicut saw a series of battles with the Portuguese, the Dutch arrived in the city in the 1600s and the British took over eventually. After Independence, the districts formally became what they are today in January 1957.

Calicut is the largest urban area in the state and is known as the ‘City of Sculptures’ as well. A fine variety of hand-woven cotton cloth Calico, which was exported from the port, is known to have been derived from “Calicut’.

Summers (April–July) are warm with the mercury touching 37 degrees Celsius and the heat is mild, making it a good time for outdoor activities. Monsoons drench the city in a sea of green-blue. Winters (October–March) is the best time to visit Calicut when the temperatures range around 19-29 degrees Celsius.

The nearest airport is at Kozhikode itself located around 28km southeast of the city center of Kozhikode. 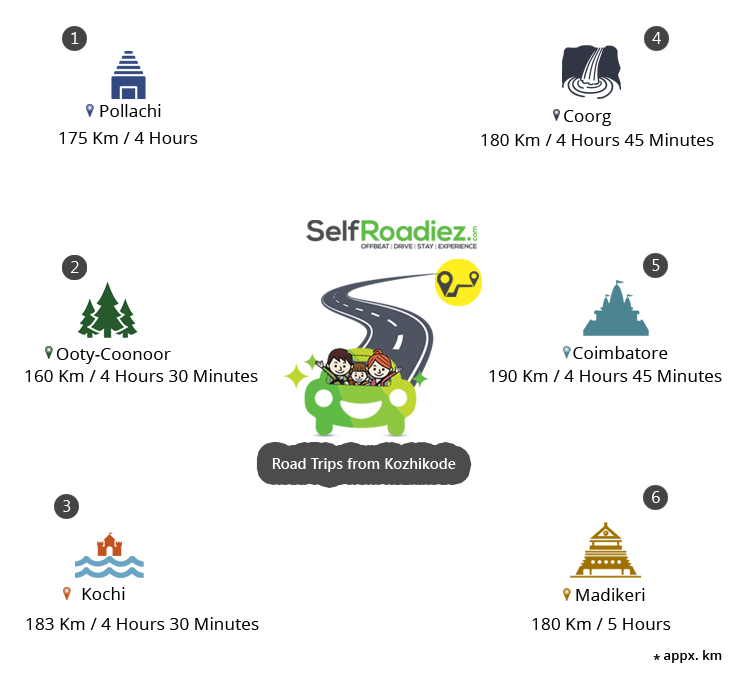 Pollachi is a historically, industrially and commercially important town and was known as the ‘Land of natural wealth and prosperity’ (‘Pozhil Vaichi’) during ancient times. Even today, the market in Pollachi (Pollachi Sandhai) is the most famous of its kind in the entire state, selling cattle, old iron, agricultural products and coconuts as well, thus earning Pollachi the sobriquet of ‘Coconut City’. Travelers can visit the Indira Gandhi National Park, the Anaimalai Wildlife Sanctuary, the Nirar, Azhiyar, and Meenkara dams, the Azhiyar Siddashram and the famous 8th-century Subramanya Temple.

Ooty (a.k.a. Udhagamandalam) and Coonoor lie deep in the heart of the Nilgiris range in South India, nestled amongst tea plantations and pine forests. Adventure seekers can indulge in thrilling mountain adventure activities such as hiking, trekking, angling, and mountain biking in Ooty. Nature and culture lovers can go fishing and boating in the Pykara Lake, enjoy the views of Silent Valley and Doddabetta peak, visit Ooty’s beguiling botanical gardens, ride on the Nilgiri mountain railway and visit Coonoor’s exotic tea plantations and pick up varieties of sweet-smelling tea.

Kochi is a melting pot of world cultures – Dutch, British, Indian and medieval Portugal. The city is famous for being the center for Keralan arts and is especially famous for being the best place to experience the classical dance of Kathakali and the martial art form of Kalaripayattu. Travelers can visit the Maritime and Folklore museums, the Santa Cruz Basilica, the St. Francis Church, the Indo-Portuguese museum, the Paradesi Synagogue and the Mattancherry Palace.

Coorg has been famously christened as the Scotland of India for its picturesque, undulating landscapes. Nestled in the lush greenery of the sweet-smelling sandalwood forests of Karnataka, Coorg is all about fragrances and aromas – of coffee, cardamom, black pepper, and honey. Travelers staying in Coorg should ditch the fancy hotels and stay at one of the cozy homestays to kick back and enjoy their vacation. Adventure seekers can find solace rafting in the Barapole river rapids or trekking in the jungle. Culture and nature enthusiasts can visit the coffee plantations, the Nagarhole National Park, Golden Temple, Chikli Dam, and the Dubare Elephant Camp.

Coimbatore, known as the Manchester of South India, is a busy trading and commercial South Indian town with great weather throughout the year. Travelers can have fun at the Monkey and Siruvani waterfalls, enjoy the scenery at Amaravati Dam, indulge in history lessons at the Gass Forest Museum, and view the beautiful architecture of the Dhyanlinga and Marudamalai temples.

In the Kodagu (Coorg) district of Karnataka lies the scenic hill station of Madikeri, a.k.a. Mercara. The town has a long association with the Haleri kings, even being named after one. In fact, it was previously named after the Haleri king Mudduraja and was known as ‘Muddu Raja keri’ (‘Mudduraja’s town’) in the 1600s. travelers can visit the famous Raja’s Seat atop the hill which offers stunning panoramic views of the valley and the forests around. Culture and history buffs will find the St. Mark’s Church, Madikeri Fort and the Omkareshwara temple riveting. Nature lovers can head to Abbey Falls.

Accommodation in Kozhikode is a mixed bag, with hotels and resorts catering to a wide spectrum of budgets for travelers, with the seaside resorts and hotels being the most expensive.

Here is our suggestion

The comfy Cottage Stay on Kallanode Road is the perfect getaway for all those who want to spend some lazy and comfortable days away from the chaos of everyday life. The homestay has two air-conditioned bedrooms and they are tastefully furnished.

You can sample the delicious Kerala cuisine on offer or make use of the self-service kitchen facility available.

Kozhikode is a melting pot of world cultures and a perfect example of how history has left its mark on a city. The city lives to tell intriguing tales about its past and is a must-visit destination in South India.