This tour originates from Bangalore, Chennai. 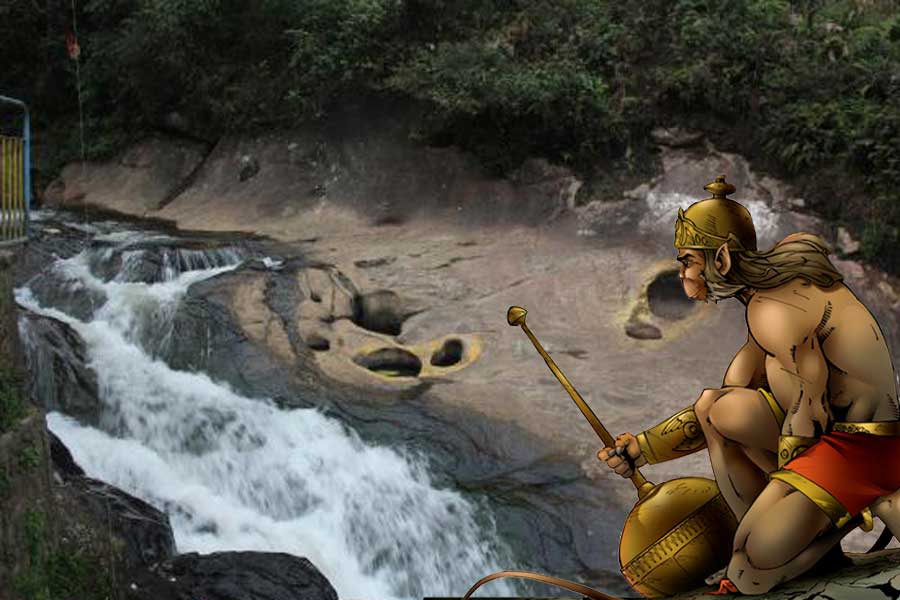 Go back in time with an awe-inspiring and historical Sri Lanka Ramayana Tour to explore an original mythological trail.

This holiday can be customized with “Number of People” and with variations on “Number of Days”. We will pack in more punch with more number of holidays. Send an enquiry and our travel experts will customize your vacation itinerary.

With a tropical climate, Sri Lanka experiences some type of monsoon all through the year. But this does not have to be a dampener on your holiday as the rains bring out the best the country has to offer visitors. The west and south west coasts as well as the hilly parts of this island are best visited from December to March while April to September sees good weather along the east coast. There are no major temperature variations all round the year and it is only as you go to the higher parts that the mercury dips down with altitude.

This island nation, albeit small in size, is large on history and scenic beauty. Blessed with an abundance of cultural heritage sites, sandy beaches, and steeped in spirituality, Sri Lanka has become a must-see destination on travel lists across the globe.

Sri Lanka is home to over 50 places mentioned in the Ramayana and though the events occurred centuries ago, locals here have not forgotten their connection to the ancient epic. For instance, the place where Seeta Devi’s ‘Agni Pariksha’ was believed to have been held is still revered and oaths taken here are held true even now. The soil on the battlefield where the massive war between good and evil is supposed to have occurred is still red in colour signifying the bloodshed that took place there, while the surrounding soil is a much lighter shade.

Meet and greet on arrival at the airport before proceeding for lunch at Bollywood Indian Restaurant, Negombo. From Negombo, head for Chilaw and start off your sightseeing with visits to two prominent temples—Munishwaram and Manavari. It was in Munishwaram that Lord Rama offered prayers to Lord Shiva as he was returning after his victory over Ravana.  Lord Rama prayed to Lord Shiva for a solution to the Brahmaathi Dosham that he believed had befallen him owing to his killing Ravana who was a Brahmin. Lord Shiva advised him to install four ‘Lingams’ in Manavari, Thirukoneshwaram, Thiruketheeswaram, and Rameshwaram in India and pray to them in order to negate the effects of the Dosham. The Shiva Lingam at Manavari Temple is the first of these that Lord Rama consecrated and worshipped. Known as the Ramalinga Shivan, it is one of only two Lingams in the world that are named after Lord Rama. The other one is in Rameshwaram, India. Overnight stay and dinner at hotel in Dambula.

Breakfast at the hotel and transfer from Dambula to Trincomalee in an air-conditioned private vehicle.  The ancient town of Trincomalee is known for its harbor which is the fifth largest natural harbor in the world. On the itinerary is a visit to the Koneshwaram Kovil which dates back to 2,000 years.  Situated within the town, the shrine is believed to have been built by Sage Agasthyar according to the instructions of Lord Shiva who was impressed by the devotion of King Ravana.  Later on, Lord Rama is also said to have worshipped here while attempting to rid himself of the Brahmaathi Dosham. After lunch at the Green Park Indian restaurant, visit the Sri Lakshmi Narayana Perumal Temple, which is a new recent addition to the list of Hindu temples in Sri Lanka, and the Sri Badrakali Temple dedicated to the fierce Hindu goddess which dates back to the 11th century AD. Dinner and overnight stay at the hotel in Trincomalee.

Breakfast at the hotel and transfer from Trincomalee to Kandy. Once the capital of the erstwhile Sinhalese kingdom, Kandy is located at an altitude of 500m which means it has a cooler climate. A lovely lake, colourful houses, and the misty hills add to the charm of this UNESCO World Heritage Site. A short ride away from this charming city is the Mathalai Muthu Mariamman in Matale, one of the country’s biggest Hindu temples, that dates to the 1800s. On the way, take a break at the Regent Spice and Herbal Garden in Mawanella and get a glimpse of how cloves, pepper, ginger, nutmeg, cinnamon, and saffron are grown in their natural habitat. Breathe in the fragrance of sandalwood, margosa, cocoa, citronella, almond, jasmine, and coconut. When visiting us, make the most of the chance to gather first-hand knowledge of their medicinal healing properties. Lunch at Lakgrow Indian Restaurant followed by a visit to the Kadiragaman Temple and Kandy Selva Vinayagar Temple.Then, take a city tour of Kandy covering popular spots like Lake Drive and Gem Museum, silk shop, Batik shops, and more. Dinner and overnight stay at the hotel in Kandy.

Breakfast at the hotel and then head for the Temple of the Tooth Locally known as Dalada Maligawa, this Buddhist shrine with its golden roof reflecting the sunshine houses the sacred of all Buddhist relics — a tooth of the Buddha. The tooth is preserved in a gold casket shaped like a ‘stupa’ and tourists are permitted to enter the heavily-guarded room where the casket sits. Pilgrims wearing white offer lotus blossoms and frangipani every day. As legend has it, the tooth was taken from the Buddha while he was on his funeral pyre and smuggled into the island nation in the hair of Princess Hemamali in 313 AD. This temple was built over a period of 100 years. Wearing of shorts is forbidden and footwear must be removed at the entrance. The temple complex comprises of many other temples and museums. Next on the itinerary is a visit to the Pinnawala Elephant Orphanage in Rambukkana, near Kegalla, halfway between Colombo and Kandy. Founded in 1975 by the Sri Lanka Wildlife department, the 25 acre plantation is also a breeding centre for pachyderms with over 100 baby elephants taking birth here till date. Before heading to Nuwara Eliya, there is a stop en route at the Sri Baktha Hanuman Temple, Ramboda. This is believed to be the region where Lord Rama’s forces were gathered against Ravana. The hills of Ramboda are thought to be where Lord Hanuman searched for Seeta Devi. The Hanuman Temple here has been built by the Chinmaya Mission with a 16 feet tall idol of Anjaneya. A visit to the picturesque Ramboda Falls and a tea factory precede lunch at the Annapurni Indian Restaurant. This is followed by a trip to the Seeta Amman Temple on the outskirts of Nuwara Eliya. Seeta Devi is believed to have prayed here every day of her captivity hoping to be rescued by Lord Rama from the clutches of Ravana. Then comes a city tour of Nuwara Eliya, once the perfect escape from the heat for the English and Scottish conquerors of Sri Lanka. Just a four-hour drive from the country’s capital Colombo, it continues to be a favourite with domestic holidaymakers, horse riding enthusiasts, hikers, golfers, and nature lovers. The city is nestled in the midst of three of the highest and stunning mountain peaks in the nation. There is also a trout hatchery, market, and colourful gardens with flowers, fruits, and vegetables. Hakgala Botanical Garden is the second largest in Sri Lanka and has over 10,000 species of flora. Legend has it that this was the Ashok Vatika where Seeta Devi was held captive by Ravana. Dinner and overnight stay at the hotel in Nuwara Eliya.

Breakfast at the hotel and transfer from Nuwara Eliya to Katharagama. Stop for a while at the Ella Gap for spectacular views of the Sri Lankan landscape before heading for lunch at the Orient restaurant for some Indian food. Next is the visit to the Katharagamam Temple dedicated to Lord Karthikeya who was sent to the battlefield on the final day of the war to safeguard Lord Rama from the Brahmastra aimed at him by Ravana. Dinner and overnight stay at the hotel in Katharagama where this temple is located.

Breakfast at the hotel and transfer from Katharagama to Colombo. The next halt is at the Panchamuga Anjaneyar Temple dedicated to Lord Hanuman. This has the distinction of being the sole temple in the world with a chariot for the Monkey God. After lunch at Navayoga Indian Restaurant, indulge in some shopping. Go for a city tour of Colombo and see the fort area as well as Pettah.  Marvel at the 100-year-old clock tower, the old Parliament, and several British-built, colonial buildings.  A Hindu temple, a Buddhist shrine, affluent residential areas with elegant homes, the Colombo Museum, the Bandaranaike Memorial International Conference Hall (BMICH), Ceramics Corporation showrooms, the ODEL Unlimited Dress Boutique, and the Majestic City Shopping Complex are just some places you can cover.  Then, have dinner and stay overnight at your hotel in Colombo.

Day 7 - Departure from Colombo to Chennai

Breakfast at the hotel before transfer from Colombo to the airport for your departure flight.

We are sorry, there are no reviews yet for this event_trip.