The banks of the beryl-grey ribbon of a Spiti River are home to the far-flung, rugged region of the Spiti valley – a desert mountain valley lying high in the Himalayan range in Himachal Pradesh.

Spiti, originally pronounced as ‘Piti’ literally means ‘The Middle Land’, i.e., the land lying between India and Tibet. Its capital Kaza lies on the Spiti River at a breath-taking elevation of 12,500 ft. Formerly a part of Western Tibet, Spiti, and Zanskar formed a separate kingdom when the king Nimagaon divided the kingdom between his sons in the 11th century. Later, Spiti was absorbed into and controlled by Ladakh, first governed by a hereditary Wazir Nono, and later by Sikhs and the East India Company. After Lahaul and Spiti formed a sub-tehsil in the 1940s, they remained so until the 1960s and was finally declared a district with Kaza as the administrative capital.

The Spiti Valley possesses cultural and historical importance of being an important center for Buddhists and houses some of the oldest monasteries in the world. In fact, Spiti’s Pin Valley is home some of the last few surviving Buchen Lamas of the Buddhist Nyingmapa sect. The stunning scenery of Spiti has also been used as a setting for films.

The Valley is practically cut off for 6 months between October and March due to the think Himalayan snow. The best time to visit the Spiti Valley is in the months between May and late September when the temperatures hover between 10 and 22 degrees Celsius.

The nearest airport to the Spiti Valley is 246 km away at Kulu. 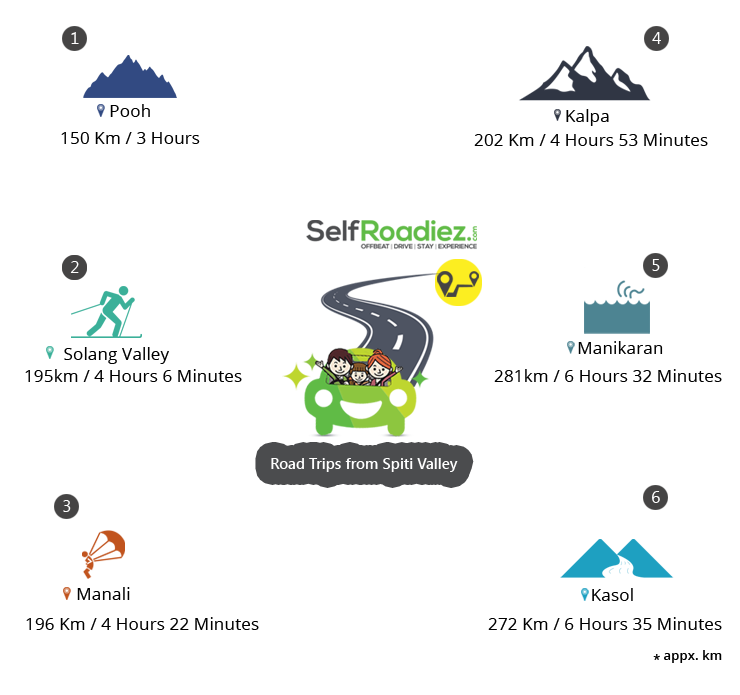 The scenic town of Pooh (a.k.a. Spuwa) is famous for its acres and acres of almond trees, vineyards, apricot and grape orchards, and undulating green fields. An important historic trading center the town of Pooh today has a strong Buddhist soul to it. The settlement is known to be the site for an ancient Buddhist temple Lotsaba-bai-lha-Khang. The town’s local pre-Buddhist deity Dablā has no altar or dwelling in Pooh, with his only manifestation being a small idol set on the upper part of a pole and adorned with long pieces of colored cloth and yak tail hair. One can head to Pooh to experience the remnants of history and great culture.

The Solang Valley is the where all the action is, for it is the place to go to in Himachal Pradesh for summer and winter sports. Travelers can indulge in thrill-seeking activities such as paragliding, parachuting, horse riding, riding the ropeway, skating, and zorbing, which involves rolling down the slopes of the hills in a giant ball. The same slopes are converted into snow-filled skiing grounds in the winters. One can even indulge in climbing and trekking to reach the summits.

The once-bucolic valley settlement of Manali on the banks of the River Beas is a crowd-puller of sorts. Right from backpackers, adventurers, and families to honeymooners and travelers heading toward Spiti and Ladakh, Manali thrills and excites to the hilt. Thrill-seekers can engage in river rafting and crossing, paragliding, zorbing, mountain biking, canyoning, skiing, and trekking. One can head to the treacherous yet stunningly irresistible Rohtang Pass to enjoy views of the dry, rugged reaches of the Spiti Valley. One can also visit the many waterfalls, the Hadimba and Manu temples, the Nyinmapa Buddhist temple, the many monasteries, ride a yak, and meditate at Arjun Gufa.

Located in the heart of the Sutlej River valley in the Kinnaur district of Himachal Pradesh lies the scenic, bucolic town of Kalpa, famous for its apple orchards. Kalpa is famous for its temples which include the tower-style Durga temple, the ornate Hindu Narayan-Nagini temple, and the colorful Buddhist Hu-Bu-Lan-Khar Gompa. Travellers can also enjoy fishing and river rafting in the Baspa river, trekking, camping, mountain biking and star-gazing. One can also shop for Kinnaur handicrafts.

The holy settlement of Manikaran lies in the Parvati Valley on the banks of the mighty Parvati River. Manikaran is most famous for being a pilgrimage center to both Sikhs and Hindus, housing a temple and Gurudwara in the same complex. The town is also famous for its hot springs as well as its beautiful landscape.

The small village of Kasol, also fondly called ‘Mini Israel’, stretches along the River Parvati and is divided into Old Kasol (Bhuntar side) and New Kasol (Manikaran side). Largely catering to an Israeli/hippie crowd, Kasol is all about cheap guesthouses, bakeries, reggae bars, parties and the forested valley just beyond, catering to both party–freaks and adventure–seekers. Travelers can stroll down 3.5km to the Katagla and Chalal villages, camp beside and fish in the Parvati River, visit the Gurudwara and hot springs at Manikaran, trek to Kheer Ganga and Tosh valley, engage in rock climbing and binge on Israeli food.

Travelers can visit the Dhankar Monastery and Lake, Tabo Lake, Sakya Tangyud Monastery, Chandratal and Suraj Tal Lakes, Key Monastery, Spiti’s biggest and oldest, and the Pin Valley National Park. One can also visit the Kunzum Pass, the famous Lhalung Monastery, and the town of Udaipur, and the town of Lossar, which is the first town after you enter the Spiti Valley. Adventurers can also indulge in thrill-seeking activities such as trekking, mountain-biking, hiking, river rafting, and the likes.

Though Spiti Valley is fairly remote there are many options for accommodation available here. Homestays, Cottages, and Hotels that cater to all sorts of budgets are available here.

The local language is Bhoti, but everyone understands and speaks Hindi, although the locals understanding English is a far cry. Travelers should ideally enter the Spiti Valley from Manali and travel via the Rohtang and Kunzum La passes, where one will find no civilization up till Kaza. The other route from Shimla and the Kinnaur valley is more comfortable and longer, but the landscape is unlike what one will find on the Manali route. For the latter route, Indian nationals need a valid identity proof and foreign visitors need to have an inner line permit to travel on part of this road.

Visiting the Spiti Valley is an experience to savor – with beautiful landscapes and intermix of culture to enjoy.