A 100 small settlements, 2300 people, 43 nationalities, one community – that’s the ‘City of Dawn’ Auroville. Auroville lies 12km northwest of the town of Pondicherry and has its origins in the French language – ‘Aurore’ (‘dawn’) and Ville (‘city’). It is also said to have been named after Sri Aurobindo.

Auroville is an international community that was built on the principles of sustainable living, harmony, peace and ‘divine consciousness’ has fast gained repute as a place of positive energy across the world. The idea of Auroville took birth in the Annual Conference of the Sri Aurobindo Society of Pondicherry, 1964 when it passed the resolution for the establishment of a city dedicated to Sri Aurobindo’s vision. With Mirra Alfassa (thereafter known as ‘The Mother’) as the Sri Aurobindo’s spiritual collaborator and Executive President of the society, Auroville was inaugurated in 1968 on what was a barren wasteland 20 sq. km in size.

Auroville’s inauguration ceremony on the 28th of February, 1968 took place around a white Urn in the shape of a lotus bud, which is now placed at the focus of a large amphitheatre, into which youth from every Indian state and  country in the world placed a handful of soil from their respective states/countries. In late 1969, an American horticulturist was called in to begin work on the gardens. In early 1971, a nursery was established to study, acclimate and propagate plants for the gardens. In 1973, Auroville’s iconic symbol of Matrimandir was completed, with ‘The Mother’ passing away at the same time.

Today, Aurovillians run a wide spectrum of numerous projects ranging from handicrafts production, renewable energy, and organic farming to IT and schools, employing close to 4000-5000 people from nearby surrounding villages.

The best time to visit Auroville is in the months between November and March when the rains are lesser and temperatures range from 17 to 27 degrees Celsius.

The nearest airport is Pondicherry Airport which lies 10km south of Auroville. 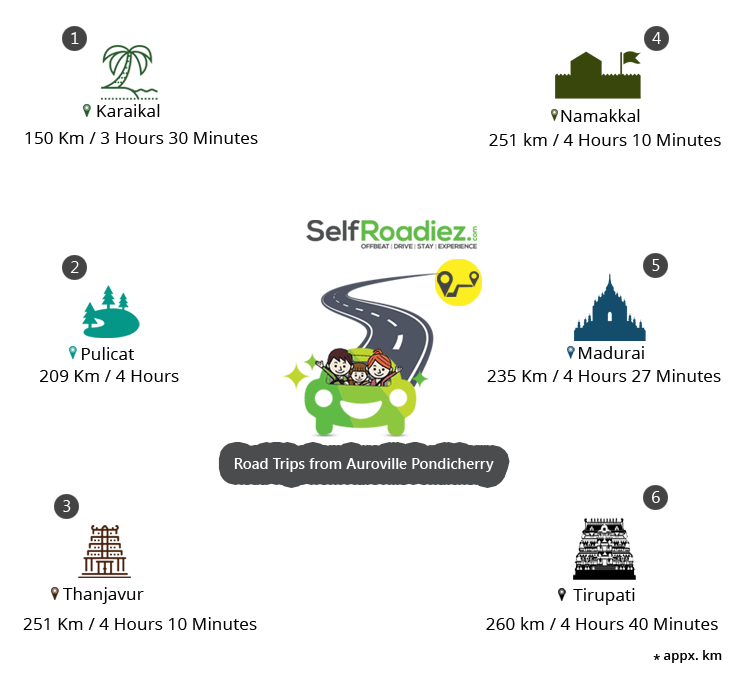 The former French colony of Karaikal on India’s eastern coast is the perfect getaway for culture trippers as well as those travelers who seek relaxation. Known for its rich cultural heritage, Karaikal is known to be the site of the only temple devoted to the Lord Saneeswara (Shani Bhagwan or Lord Saturn) and it also houses two famous shrines of Mastan Syed Dawood Dargah and Velankanni Church. Places to visit in Karaikal include Karaikal Ammaiyar temple, the Navagraha temples, the villages of Settur and Niravi, Karaikal’s sandy beach, the temple at Kottucherry, as well as the boating club.

Pazhaverkadu, better known as Pulicat, is a historic seashore town in Thiruvallur district in Chennai and is famous for the burgeoning SEZ (Special Economic Zone) that is developing in the region. The town is famous for repeatedly changing possession between the Portuguese and the Dutch, with the British thrown in the mix. One can visit the crumbling ruins of the Dutch Fort which are a testament to Pulicat’s rich past. Travelers can also visit numerous temples in the town. However, the place not to be missed is the Pulicat Lake Bird Sanctuary, where thousands of migratory birds land between October and March.

Thanjavur or Tanjore has a dizzy, historical legacy of being the capital of the great Chola Empire, one of the most remarkable civilizations in Dravidian history. Thanjavur, whose name seems to have been derived from ‘Tanjan’, an asura in Hindu mythology, has been an important center for politics, art, architecture, and religion. In fact, Tanjore’s Great Living Chola Temples feature in UNESCO’s list of World Heritage Monuments, with the most prominent of them all being the grand Brihadeeshwara Temple, where thousands worship even today. Places to see in Thanjavur include the labyrinthine royal palace, Gangaikonda Cholapuram, the Serfoji Saraswati Mahal Library, and the Thirunallar and the Garbarakshambigai temples.

Namakkal or Namagiri is a historic 7th century-town famous for the Anjaneya temple, which is famous for housing a life-size statue of Lord Hanuman carved from a single stone. Namakkal is famous for having been coveted by both the Pandyas and the Pallavas, with many dynasties eventually ruling it. Nature lovers can head to the stunning Selur viewpoint and the historic Siddhar Caves. Culture trippers will find the Rock Fort, Botanical Gardens and the Lakshmi Narasimhaswamy temple particularly intriguing.

Madurai is famously known as the ‘Athens of the East’. The temple town is famous for having been a great former trading metropolis, currently driven by an IT economy. Madurai is also associated with the great Tamil Sangam, a significant congregation of Tamil scholars, as well as the Tamil language. Madurai has a rich cultural and historical heritage due to it having been ruled by many kingdoms – the Mauryas, Greeks, Cholas, Pandyas, the Vijayagar Dynasty, the Carnatic kingdom and the Madurai Nayaks and the British. Travelers can check out places such as the Tirumalai Nayak Palace, the famous Meenakshi Amman Temple, St. Mary’s Cathedral Church, Ayiram Kaal Mandapam, the Pazhamudir Solai and the Gandhi Museum, among others.

The great temple and pilgrimage town of South India, Tirupati is known for its history, culture, and architecture, and is one of the richest pilgrim cities in the world. It is most known for the presence of the Tirumala Tirupati Devasthanam. Other places of interest are the Tirupati Temple gardens, the Veda Narayana Swami and the Venkateswara temples, and the natural geographical wonder Silathoranam rock bridge.

One can visit Matrimandir (although outsiders can only visit after having booked in advance). Even if one doesn’t get to enter Matrimandir, they can soak in the quietness and tranquillity of the place by taking refuge under of the many trees in the surrounding gardens. Travelers can eat at the Well Café, Frite Corner, and Farm Fresh to satiate their hunger pangs, and also visit the beautiful serene volcanic sand-filled Auroville Beach.

Since Auroville is a non-profit international community, the area mostly has guesthouses, cottages, and villa stays amidst nature.

Beach Resort At Auroville In Puducherry

The only thing on the land was a lonely Banyan tree, which was to be the geographical center of the town. Today, the iconic Banyan Tree is still an important site in Auroville – and one shouldn’t miss it!

Auroville is perfect for every kind of traveler and should be visited by every traveler at least once in their lifetime.